The Evolution of the ʻNational Organization for Marriageʻ 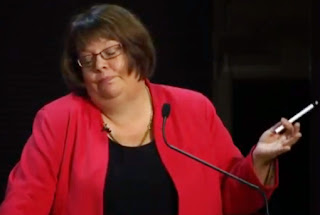 Maggie Gallagher has posted an astonishing piece on her blog this morning pretty much conceding defeat in her fight against marriage equality. The piece reads like a post mortem of the complete failures of NOM and other similar groups and questions the path forward for them as the country finds their bigoted views unacceptable in the public square.

The handwriting is on the wall and Gallagher knows it. Marriage bans are now under review in five federal appellate courts. Our unanimous victories in the lower courts and last year’s Supreme Court decision remanding the Prop. 8 challenge and dismantling of DOMA have forced her hand and her post gently tries to break the news to her frothy followers.

Right now most people who believe in the classic understanding of marriage are in shock, they are awed by the powers now shutting down the debate and by our ineffectualness at responding to these developments.

The temptation to shout and yell and stamp our feet in ineffectual ridiculousness is understandable, but it is to be resisted.

Hiding or pretending is not going to help us, now. We have to face the truth. And we have to find the Love at its heart.

And we will have to do new things, not simply do what failed, over and over again, harder.

Do take the time to read the entire piece. In it, she brings up the recent flap over Brendan Eich's ouster at Mozilla as well as the evolution of Charles Cooper. Cooper is the attorney who defended Prop 8 before the Supreme Court who has had an about face as he plans a wedding for his daughter to another woman. She goes on to discuss the complete failure of the "Religious Freedom Restoration Act" legislation in Arizona and bemoans that "progressives got the conservative movement to fold with credible and major GOP figures." She rightly sees this as a harbinger of things to come.

Although Gallagher takes pains to reassure her readers that she will still be around to help them "to build among the ruins of the old America, something new", she does not lay out any suggestions on how to make that happen. Like the Republican's plan to replace Obamacare, her plan to stop the tide of equality by reintroducing and selling bigotry wrapped in a pretty new bow simply doesn't exist.

All that appears left for Maggie now is her own evolution.
Posted by End Bigotry in Venango County at 4:05 PM 1 comment: